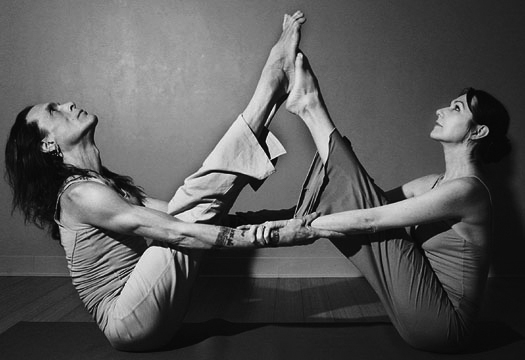 Jivamukti Yoga was developed by Sharon Gannon and David Life in the early 1980s in New York city. Two artistic punks with backgrounds in dance, music, art and poetry had a curiosity for traditional yoga practice; observing that at the time, yoga was mainly taught in the States as pure exercise. During their exploration primarily in India, they gained major influence first from the Sivananda tradition where they learned about the vast yogic practices, then Ashtanga Vinyasa where their strong āsana practice developed and stints in the jungle with their guru Swami Nirmalananda where they observed the intersectionality of yoga and politics, namely animal rights and environmentalism. Down the line, they grew close to Bhakti yogis such as Shyam Das, Bhagavan Das, Krishna Das and Jai Uttal and found their guru Sri Brahmananda Saraswati, a retired neurosurgeon who specialised in meditation, Sanskrit and self-inquiry.

Their yoga school in Manhattan was revolutionary for the time, teaching not only sweaty, physical classes, but introducing thousands of Americans to the teachings of Patanjali’s Yoga Sutra, the Bhagavad Gita and Hatha Yoga practices, while chanting sacred Sanskrit mantras. Being the artists that they are, creativity was always present in their classes as they incorporated contemporary music, current world issues and interwove these themes effortlessly with the traditional practice. They were, and remain, interested in “putting the pieces back together again”, so that within the one class, you may experience chanting, meditation, pranayama, āsana, satsang and exploration of the scriptures. Sharon Gannon and David Life were the pioneers of yoga as we know it in the 21 st century, and without them, who knows what the landscape of yoga would look like now?

I consider myself so blessed to have been their student while they were still running Jivamukti Teacher Training – having studied directly under them. It was a privilege (and incredibly humbling) to have Sharon participate in my Advanced Board Exam in early 2012, and have her give me a pass.

I love my teachers dearly and feel immense gratitude for all they have done to pave the way for punks like me to teach the sacred practices of yoga in a creative and radical way.

“A yogi is not normal”