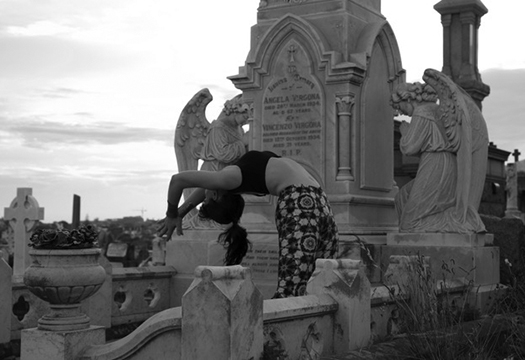 In 2011 when I returned home from Jivamukti Teacher Training in New York, I was lucky enough to be walking straight into a job at the newly-opened Jivamukti Yoga Sydney. The owners had ambitiously decided to open 4 studios at once, and while there were plenty of time slots to fill, I was still a newbie and more than happy to take whatever was offered to me.

At the time, the “bad” time slots passed my way included Wednesday 6.30am (a class I continued to teach for 10 years) and Friday night 6pm.

At first, only a handful of students would show up at the end of the week, and who could blame them? We were in Newtown, one of the main party hubs of Sydney, and there were probably a million cooler things to be doing than practicing yoga on a Friday night.

So I decided to figure out what I could do to make Jivamukti Yoga one of the cool places to be before the weekend kicked in.

Honestly, one of the reasons I was turned off yoga as a teenager was because it seemed like something lame that people my mum’s age went to, where they did some light stretching, accompanied by background music with wind-chimes and pan pipes. As a young adult, when I walked into one of my first Jivamukti classes, my perception of yoga was turned on its head. Specifically, I found myself in a “Rock- āsana” class, taught by a visiting teacher from the States, whose playlist was entirely Guns and Roses, Aerosmith, Led Zeppelin and Pink Floyd. I remember walking up to him after the class (although my legs could hardly move for all the sun salutes we had done) and telling him “I’m going to do Jivamukti training one day”.

Sure enough, 6 months later, I was in New York becoming a Jivamukti teacher.

Back in Sydney, I was at first apprehensive about playing anything too experimental in my classes. Enya was pretty standard for me, and if I was feeling wild, I’d chuck in a Beatles song.

But as my confidence in teaching grew, so did my iTunes library. Before long, my playlists were full of the Smiths, the Cure, Placebo and Portishead. Some nights it was Rihanna, Beyonce, Britney and Gaga. And the interesting thing was… the classes kept getting bigger and bigger. Whereas I used to teach the class in the smaller upstairs room, we quickly had to migrate downstairs to the larger studio in order to make space for everyone.

I ended up teaching what came to be known as the Friday Night Party Class for close to 7 years. Every Friday night at 6pm, I knew I’d be in for a fun time with all the amazing yogis who chose to unwind with some sweaty movements and killer tunes.

Those were the good times.